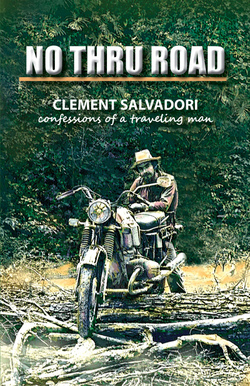 No Thru Road describes 29 motorcycle trips, and one in a VW van, that Clement Salvadori has taken over the last 50 years on six continents, in places like Afganistan and Zimbabwe, Peru and Texas.

Now available from Amazon, Whitehorse Gear, Aerostich, and many other booksellers.

As material for his sixth book, No Thru Road, Clem Salvadori has reached back into his substantial archives, assisted it seems by drawers full of photos and trip notes, to bring us this 410-page tale of his wanderlust-inspired travel across thousands of paved, unpaved and barely traceable roadways over six continents. It also includes a bit of an autobiography of this truly erudite and colorful character. Its stories serve as a bit of a time machine as well, with glimpses into places and traveling conditions that no longer exist and my never occur again. This is especially true of Clem's 1973 journey through Afghanistan to Pakistan. Although traveling and living conditions were definitely primitive, at least there were no reports of getting caught between warring factions. Motorcycle Consumer News

No Thru Road is a wonderful read and had me zipping right through all 400+ pages pretty quickly. This is not a story about one particular ride, but bits from various journeys that jump around from continent to continent and decade to decade, spanning about 50 years of North American and international travel. At first I thought this would be a bit confusing and leave me lost for continuity, but that did not turn out to be the case at all. Rather, this gave me a view into his cultural insights and perspectives from his various ages while traveling; from his youthful explorations in Europe in the late fifties, to North, Central, and South America, more travels in central and Southeast Asia, Australia, Africa, and then back to Big Sur in 2012. CityBike

While the motorcycle is always at the heart of these stories, far more important are Salvadori's impressions of the countries he rides through and the people he meets along the way. He artfully injects history, sociology, politics and economics into the mix, and comes up with fresh and vivid descriptions of the many places he has been. On these journeys he was frequently told, "The road doesn't go that way; you can't get there from here." But, for Salvadori bad roads, bridgeless rivers, and seemingly insurmountable mountains were always part of the fun -- if one may call it that. A big part of the adventure was to find a way, even when there was supposedly none. You don't have to be a motorcyclist to enjoy this book, but if you are you'll be inspired to travel more yourself to not only see the world firsthand but also to face your own set of challenges just as successfully as this great traveler and storyteller has. Whitehorse Gear

This has been a busy year for Clem -- in addition to penning touring stories for us in Washington, Tennessee, Arizona, New England and California, the traveling man has just released a new book, No Thru Road, a 410-page compilation of 30 stories from his motorcycle travels on six continents, from Afghanistan to Zimbabwe. No Thru Road is a thoroughly enjoyable read, especially because you can jump in and out of the book, choosing to join Clem for one of his adventures in Peru, Nepal, or the Bonneville Salt Flats as you like. Rider Magazine 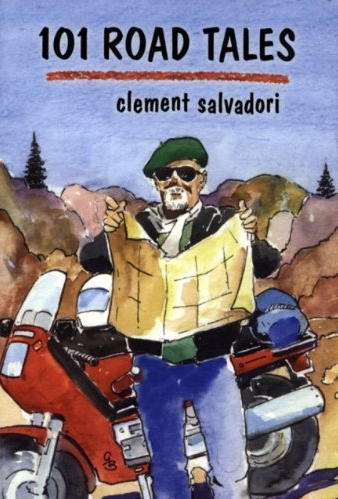 Popular motojournalist Clement Salvadori has been sharing his stories from the road with the readers of Rider magazine since 1988. Now, 101 of those engaging Road Tales have been brought together in one book, cleverly illustrated by his long-time friend Gary Brown. Salvadori loves to travel by motorcycle and loves to write. His combining the two has given him a thoroughly satisfactory life, and his contentment and joy of living shine through this collection of columns from the past two decades. Though he does admit to being destination-oriented at times, many of his columns focus on the little things that make the journey itself the most memorable -- the rhythm of the road, the music of the bike, the beauty of the ride, and the exhilaration of being at one with the bike and the road. Meet some of the characters he has encountered, laugh with him at some of his blunders, and join him for bread, cheese, wine, and a stupendous vista somewhere away from the hustle and bustle of humanity.

The great thing about Clement Salvadori's new 101 Road Tales book is that you can start reading on any page. Each couple of pages starts another of his masterful ruminations about motorcycling. It's motorcycling that he writes about, not motorcycles. Clem writes: "I don't race bikes, I don't restore bikes, and I only fix them when there is nobody more competent around." But ride them, he does. "I've ridden in roughly 70 countries on precisely six continents -- I'll leave Antarctica to those hardier than I." He seems to recall details of every road, not to mention every motorcycle since 1902. BMW Owners News

Salvadori loves to travel by motorcycle and loves to write. Combining the two has given him a thoroughly satisfactory life. His contentment and joy of living shine through this collection of columns from the past two decades. Don't expect a detailed travel guide to places near and far, but rather a guide to the enjoyment of traveling, especially by motorcycle. These tales are spun by an observant and experienced traveler who can make a quick ride on the back roads near his home just as entertaining as a trip across the country. Meet some of the characters he has encountered, laugh with him at some of his blunders, and join him for bread, cheese, wine, and a stupendous vista somewhere away from the hustle and bustle of humanity. Backroads

Salvadori has anthologized a treasure trove of experiences, all gleaned from his years of wandering the nation's byways. And if you've spent time aboard a motorcycle, you're bound to connect with any number of his narratives. The pieces are short, to the point, and as fun to read in one fell swoop as they are in multiple sittings. It doesn't matter whether your two-wheeled exploits have involved reaching for the far horizon or just traveling the few miles to the parking spot at work. 101 Road Tales will elicit that many chuckles and a plethora of "been theres" and "done thats" as well. RoadRUNNER

Clement's travelogues are not the stuff of routes and must-see stuff, but observations of things that confront riders on the road, like running out of gas, riding in the rain and snow, or finding the perfect camp site. He has a knack for focusing on the little things that make riding special, like meeting an octogenarian in West Virginia with memories of his first bike (a Flanders), roasting potatoes in tin foil in a bed of coals while camping in the Ozarks, and drinking fresh coffee offered by unexpected but gracious hosts in southern Mexico. Clement reminds us it's the experiences we open ourselves up to when we ride that matter -- not the destinations. Motorcycle Classics 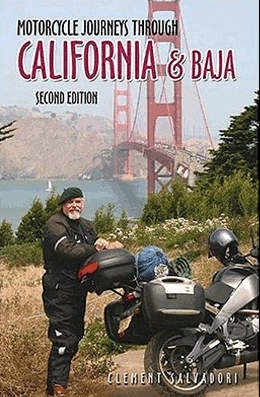 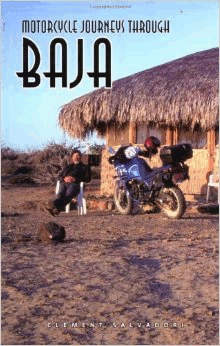 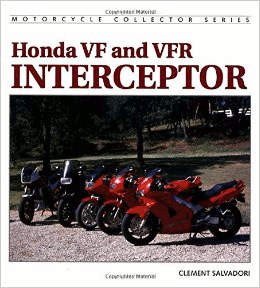 These four books are now out-of-print, but pre-owned copies are available from used-book stores like AbeBooks.com. The first three books are practical guides, with route suggestions, places to stay, things to see, personal experiences and recommendations. The fourth book is an entertaining review of the Honda VF and VFR Interceptor models from their inception in 1983 to the VFR 800 in 2002.

On the Right Track 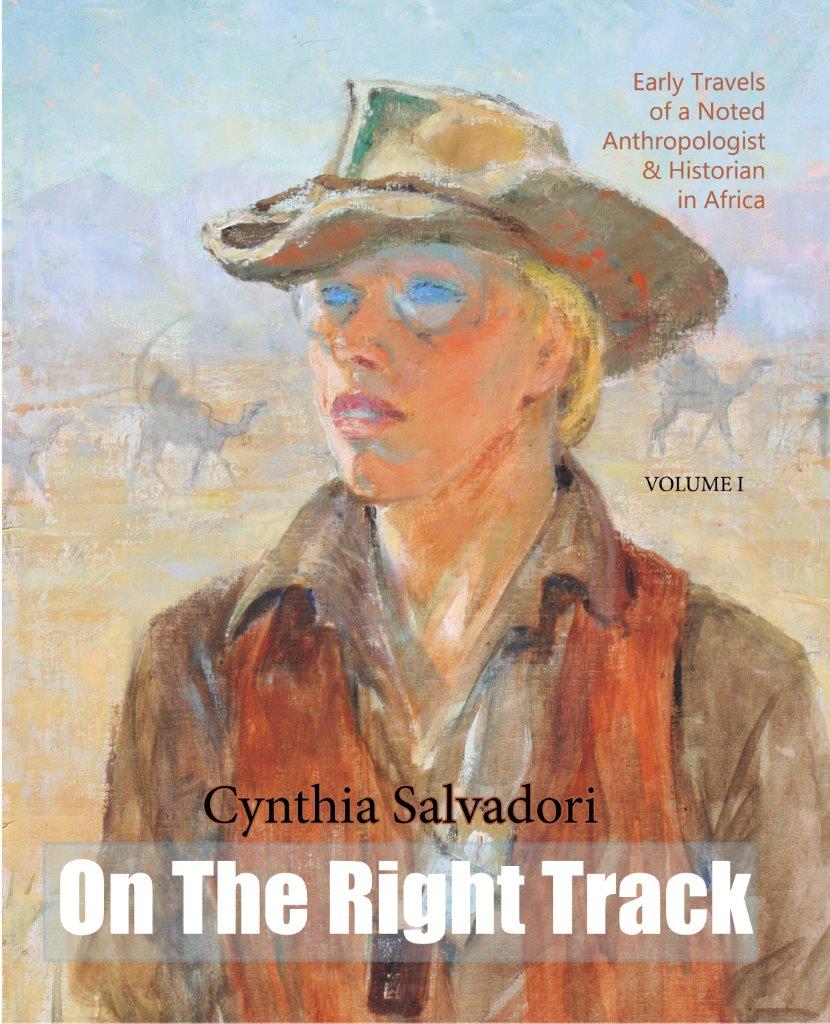 On the right Track in three volumes, covers 15 years (1967 to 1982) of traveling and working on the African continent as recalled by Cynthia Salvadori, noted social anthropologist, historian and photographer. These early experiences with her long-time companion and working partner, Andrew Fedders, influenced every facet of her later life and were the beginning of her passion to document and preserve the history of marginalized peoples and to capture fast-disappearing moments in African cultures. She and Andy were initially intrigued by remote, indigenous tribes still living the life of their ancestors in the face of ever-encroaching modern-day "progress". Their bare-bones, slow methods of travel allowed them ample opportunity to observe, participate in, and record local life all over the continent. During these years they also researched the Maasai and Turkana peoples of Kenya, other African pastoral cultures and various herder tribes of the Nile, especially in the Sudan. Later in life, her anthropological interests expanded to include documentation of numerous African-Asian cultures, of Jews in Kenya, as well as of human rights abuse in Kenya, Ethiopia and elsewhere ... to name only a few.

Cynthia was trained in anthropology at the University of California, Berkeley, did post-graduate studies at Bennington College, and essentially lived in Africa from 1958 until she died in Lamu, Kenya, in 2011. She published six books, co-authored another three with Fedders, edited, co-authored or translated works with numerous authors, received grants to document tribal ceremonies (Gabra, Boran, etc.), and wrote hundreds of articles as well.

Though well-known and respected in Africa, the publication of On The Right Track will hopefully bring deserved recognition of her life's works to other parts of the world. The three volumes total 1072 pages with 669 photos and 25 maps. Volume I reflects 1967-1972, Volume II is 1973-1975, and Volume III contains 1976-1982. On the Right Track is published by Trovatello Press and available through Amazon.com and various booksellers worldwide. Each volume is sold separately and has a retail list price of US $20. each. For additional information, contact Trovatello Press, 8240 Toloso Road, Atascadero, CA 93422 USA, or e-mail salvadori@charter.net, or phone (805) 462-0833.

The Labour and the Wounds 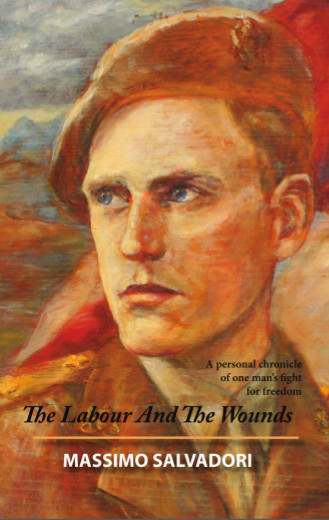 The Labour and the Wounds was originally published in Italian in 1946 and later translated into English. It has been re-issued in 2017 with a new foreword by Clement Salvadori, Max’s son, to remind us that — given the contentious state of present-day international politics rife with authoritarianism — liberty and democracy should never be taken for granted.

Having endured beatings from Mussolini’s fascists and political imprisonment in Italy, Max forged ahead in his personal quest to end Italian fascism by joining underground movements and, after war breaks out, enlisting in the British army’s Special Operations Executive (SOE) and commissioned to operate in Italy both overtly in uniform as well as covertly behind enemy lines. His first-hand experiences lend credence to 'one man can make a difference.'

Max writes, "Although man has an inherent capacity for freedom, the concept of liberty and the institutions through which that concept becomes the practice of free societies, are the result not of laws of nature but of conscious creative efforts. What man creates, man can also lose. Those who are convinced that liberty is good and necessary have no right to sit back and let things go when free institutions are threatened.

"This, man's conscious struggle for freedom, is the thread connecting the episodes in this book. But why write about one individual's small part in the conflict between despotism and liberty? Who cares what happened to an unknown man, or what he did?

"We should not forget that behind masses and their movements are always individuals, their experiences and their actions. One life reflects thousands or millions of lives. Historians and philosophers write about liberty, but it is through the actions of individuals that ideas become the practice of everyday life. In many countries there would be no liberty today had there not been hundreds of thousands of people whose efforts translated the idea of liberty into free institutions. That is why the book was written."

The Labour and The Wounds is published by Trovatello Press and available through Amazon.com and various booksellers worldwide. The paperback has a retail list price of US $15, and the e-book format price is $3.99. For additional information, contact: Trovatello Press, 8240 Toloso Road, Atascadero, CA 93422 USA, e-mail salvadori@charter.net, or phone (805) 462-0833.